You trying or ever tried to give up anything? 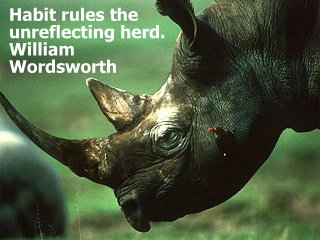 Ever heard ‘it takes 21 days to change a habit’?

I think I can safely say, that for most of us, most of the time, when we endeavour to do the 21 days, to cut out the unwanted or adopt the new healthier behaviour, we generally give up as quickly as we started! Never mind 21 days, we usually stop after just a few days. It is so difficult for us to change a habit, and even the most committed, focused and disciplined of us struggle.

For those of you who are about to embark on a change of habit I have some harsh news for you. It actually takes on average 66 days for new behaviours to become unchangingly automatic. Worse than that, research shows that it can take some people up to 245 days to change a habit!

The good news is that change is possible, when you know how! Recent discoveries in neuroscience have made some amazing discoveries about the ability to learn, change and adapt.

Ever heard the saying ‘“neurons that fire together, wire together”? This refers to the fact that we have cells called neurons within our brains and nervous systems, that are responsible for everything we do. Neurons link up with each other and form strong bonds based on your experiences, emotions, thoughts, interactions with your environment, etc.

Think of it like this; ever hear a piece of music and it reminds you of a certain time in your life, certain person/people, certain clothes, smells, sensations etc? This happens because there was some bit of neuronal wiring, that when the music activated one area of your brain, there was a cascade of electrical impulses to the surrounding neurons. Due to proximity of the neurons, the memories were triggered.

The term ‘brain plasticity’, refers to the lifelong ability of the brain to re-organize neural pathways based on new experiences. We can actually re-wire our brain by choosing what we expose ourselves to. And therefore, habits are possible to break.

Tune in next week if you’d like to learn how to change habits. But before you do that have a think about this:When we think of habits, we think of smoking, couch hogging (i.e. not exercising), eating unhealthily, gambling, checking and re-checking emails or social media pages, to name a few. If you are one of the lucky ones who has none of these vices, do you think you might have other habits that are not serving you well?

For example, how about not recognising the efforts of your colleagues, or not responding to phonecalls, or not implementing the step-by-step instructions you learnt at that staff training you attended?

As I say, have a think and tune in next week.