What Do Rats Tell Us About How We Learn? 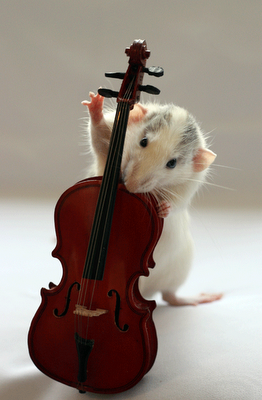 My mother is terrified of rats. Actually anything that resembles a rat, e.g. mice, guinea pigs, gerbils, hamsters, in fact anything that is small and furry, with a tail, and could potentially sit in your hand. This fear does not extend to miniature dogs…yet!

I haven’t got to the bottom of what caused her fear, but I am now scared of rats too! I don’t even know how this happened, because I used to think her fear was ridiculous!  It’s something I am now working on getting over!

The great thing about rats is that they tell us so much about our own brains and behavior.

Did you know, that when rats are raised in a complex and challenging environment, their brains increase in the size of the cortex, the length of neurons, the number of synapses, and the level of neurotransmitters and growth hormones (Guzowski, et al., 2001; Ickes et al., 2000; Kempermann et al., 1998; Kolb & Whishaw, 1998).

The benefits of stimulating environments are not just reserved for the young. When adult rats are exposed to training and enriched environments, the effects of earlier nervous system damage and genetically based learning deficits can be ameliorated (Altman et al. 1968; Kolb & Gibb, 1991; Schrott et al. 1992; Schrott, 1997).

Although it is not possible to do such invasive research with humans, there is much evidence to suggest that our brains react in the same manner (Cozolino & Sprokay, 2006).

The brain has been shaped by evolution to adapt and readapt to an everchanging world (Cozolino & Sprokay, 2006).

The ability to learn is dependent on modification of the brain’s chemistry and architecture, in a process called “neural plasticity”. Neural plasticity reflects the ability of neurons to change their structure and relationships to one another in an experience-dependent manner according to environmental demands (Buonomano and Merzenich, 1998; Trojan and Pokorny, 1999).

My point is, that everything you think you know and feel now, can change for better or worse depending on what you focus on. Although rats freak me out, I can get rid of this fear!

All this applies to things like communication skills training and customer service training – Courses just actually need to be designed to take what we know about the brain and learning into account. We obviously make every effort to do this at adaptas™.

By the way, I am still one step ahead of my mother because I am at peace with guinea pigs, gerbils, hamsters!

I believe there is a hamster hotel in France, that gives guests the chance to live like a hamster – where you can eat grain, run in a giant wheel and sleep on hay. See http://www.youtube.com/watch?v=oJW4RAUDBBo for a short video.

Let us know if you visit it!