Changing our behaviour by becoming aware of our habit loops 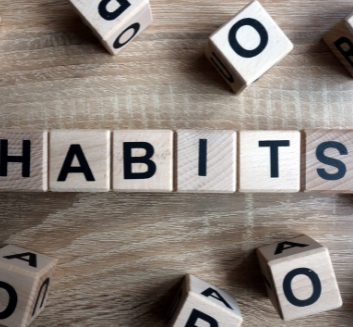 The process of how our habits form is divided into four stages: Cue, Craving, Routine and Reward. It is helpful to become aware of these fundamental parts when we wish to elicit behaviour change that sticks. The four stages underlie each habit we have, and our brain runs through them in the same order each time.

Let’s take the example of Jim and June. Jim’s habit is to have a drink every night while watching TV after he gets home from work. He knows that drinking every night is bad for his health, but feels unable to change this habit regardless. June finds herself getting distracted on her phone while at work. Her habit is to pick up her phone when she is feeling stressed. June knows that she could be more productive if she didn’t get distracted by her phone, but, similar to Jim, she feels unable to break free of her pattern of behaviour. The Cue is the trigger that initiates the behaviour. For Jim, this was sitting down to watch TV. When Jim switched on the TV he became accustomed to reaching for a drink. Jim’s awareness of his trigger was an essential first step that allowed him to take action in changing the routine. June’s cue was feeling overwhelmed by her work. Scrolling through her phone placated the stress she experienced, albeit temporarily. She realised that all she was doing was procrastinating and prolonging the inevitable, which led to her becoming more stressed than she was initially. Once she became aware of her habit loop, it became clear what action was necessary to break the cycle.

Becoming aware of our cues for unhelpful behaviours is essential. It is only then that we are able to notice what action can be taken to change our behaviour.

Cravings are the motivational force behind every habit. What you crave is not the habit itself but the change in state it delivers. In Jim’s case, he craved a drink to unwind after a long and stressful day at the office.  Any craving is a desire to change our internal state. Jim realized that he was in an agitated and stressed state when he got home from work, which made him crave a drink to feel more relaxed. June craved a semblance of control that scrolling through her phone brought her when she felt overwhelmed by her work. She wanted to escape her stress and anxiety by scrolling.

The routine is the action of the habits we display. For Jim, this was drinking every night whilst watching TV. Jim has practised this routine for over three years, so the habit is deeply embedded. However, he got curious and asked himself why he drinks every night, why he wants to stop and what the repercussions will be if he continues. Upon asking these questions, he realised that he drinks every night due to the stress of work. He decided to try reducing this stress a different way by practising 10 minutes of meditation every day after work instead of reaching for a drink. He discovered that he wanted to stop for three reasons – he wanted to be healthy and live a long life, he didn’t want to foster a dependence on alcohol and he was fed up with showing up to work groggy.

June’s routine was escaping her stress by scrolling through her phone when she felt overwhelmed. She got a promotion two years ago and has not been proactive about delegating her work when she feels like she’s about to take on too much. As such, she feels overwhelmed often, and naturally gravitates towards the phone to alleviate the stress she experiences. She feels as if she isn’t living up to her potential in her company. Her anxiety has bled into her personal life and it has had a knock-on effect on her sleep. She is often restless until the early hours of the morning. For these reasons, she decided she needed to do something about it. She realised her cue was overwhelm, and her response to this was mindless scrolling. To counteract this, she did two things – focused on becoming a better delegator, and left her phone in a different room.

When we want to change a behaviour, we must ask ourselves WHY. If our WHY is strong enough, then we will choose to change our behaviour, but if it is not then we will not feel compelled to do so. We must get curious around the reasons that underpin our habits so that we know how to change them.

The reward is the end goal of every habit. They serve the purpose of satisfying cravings. Jim’s reward was the momentary respite alcohol would bring him after a long day at work. Jim realised that the reward he sought was a mental break from the stress of thinking about work. In knowing this, in addition to meditation, he decided to swap the habit of drinking every night for watching a new episode of a series with his girlfriend. It served the same purpose as the drinking, giving him a release from the stresses he experienced from thinking about work.

June’s reward was the temporary release from the pressure she experienced from her workload. After cultivating awareness around this, she decided to be proactive rather than reactive. She delegated work to her colleagues, practised saying no when she was too busy and left her phone in a different room so she was not tempted. Her reward is the same – a reduction in overall stress and a feeling of being more in control.

What can we do with more awareness?

Jim was initially unaware of his habit, falling into the routine without ever taking a moment to realise why he was doing it in the first place. Once he asked himself ‘why’, he realised that the root of the problem was stress. He discovered more positive ways of dealing with this stress through meditation and watching a series with the person he loves. He discovered his reasons for wanting to stop drinking, and they outshone the momentary enjoyment he got from doing it.

June fell into her unhelpful cycle two years ago and has been a victim of distraction ever since. Upon becoming aware of her habit loops and getting curious, she managed to break this cycle.

We must realise that we can always make a choice to change our habits. Garnering awareness around them is the key to cultivating change. Getting curious, asking yourself why you practice the bad habit you wish to break, getting clear on your cues and rewards and discovering your reasons ‘WHY’ you wish to stop will help you in realising your true potential.

Think of yourself: what habits do you have that are unhelpful or blocking you from fulfilling your potential? It is worth reflecting upon your habits and habit loops so that you too can break these negative cycles.

1. The four stages of a habit are Cue, Craving, Routine and Reward, understanding each stage develops our self-awareness and helps us to take action.

2. Get curious about your own behaviour.

3. Focus on the ‘WHY.’ Discover what is important to you and use it as your reason to change.

4. Gather awareness around your cues and rewards.

5. It’s up to you. You can make decisions to change your habits.