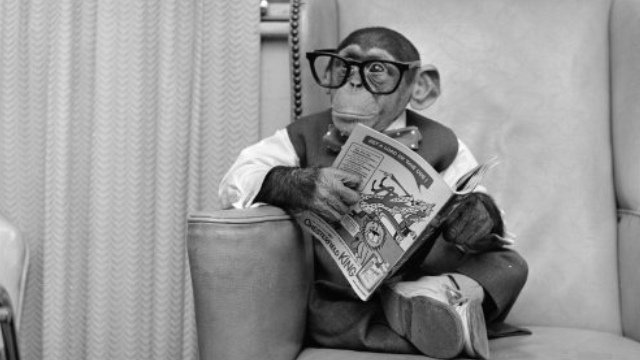 The ability to communicate is vital to a species’ survival, and all animal species communicate, some in ways that are impressively proficient. But none achieve the precision and flexibility that characterizes human communication, a capacity due in large part to the uniquely human ability to use language (Deacon, 1997; Hauser, 1996).

When it comes to communication, animals have it easy, in many ways, compared to us humans. Robert Krauss (2002) points out that, upon returning to its hive, a foraging honeybee communicates the direction and distance of a source of nectar by engaging in an elaborate waggle-dance (von Frisch, 1967).  Vervet monkeys (native to East Africa) have three distinctive vocal alarm calls that signal the presence of leopards, eagles and snakes, their three main predators. Upon hearing one or another call, a Vervet will respond appropriately–climbing a tree in response to the leopard call, scanning the ground when the snake call is sounded (Seyfarth, Cheney & Marler, 1980).

We humans similarly use sounds and body language to communicate, however we have this complicated system of words and a developed frontal cortex which make us more advanced and effective communicators but also just seem to all make it way more complicated than in the animal world (although Dr Doolittle may disagree with me!).

Bertrand Russell once remarked that “No matter how eloquently a dog may bark, he cannot tell you that his father was poor but honest.” Krauss (2002) points out that although the observation is self-evident, even banal, it points to a fundamental difference in the expressive capacities of language and other communication modalities.  Vervets can signal the presence of a predatory eagle, but even the most articulate Vervet cannot refer to the eagle that attacked a week ago; their communication is limited to what is immediately present. Perhaps more than any other feature, it is the capacity of language to convey displaced messages that distinguishes it from other communication modalities.

The ability of language to generate an unlimited number of meaningful novel messages that are not bound to the here and now, combined with the cognitive capacity to exploit these properties, allows human communication to be extraordinarily effective and versatile… and complicated in my view.

I am always harping on about this and build it in to every staff training, but we learn how to speak from an early age by picking up all the signals around us, we learn about the structure of our mother tongue and how to write in school. Many of us, also have to opportunity to learn the languages from other countries and cultures. Nevertheless, we do not have a class in ‘communication’ and all the subtleties that go with language, body language, the parts of communication that are conscious and unconscious and all the nuances that go with this. The complications of language – verbal and non-verbal cause arguments time and time again amongst people, both people who know each other and who don’t know each other. In families, and organisations alike an inability to understand and utilize communication effectively, causes things not to get done, because people don’t know how to ask or how to empower others through their communication. On the frontline, staff don’t know how to ask customers/ clients what they need, or to pick of subtle cues of interest or disinterest in their customers.

So many problems can be avoided and so many possibilities can arise when people understand the subtleties of communication. When the majority of people spend a minimum of eight hours of the day at work with or near other people (colleagues an customers) it is vital to improve communication in the workplace.

In fact, if people attend effective communication training there is often a knock on effect on their private and family lives, meaning people arrive happier to work in the first place, and are hence more productive.

Contact us if you would like to know more about how adaptas™ can develop and deliver effective communication training for your organisation.